The history of the LUXMAN audio began in 1925, the year radio broadcasting started in Japan.

Kinsuido was the first company to display and sell radio receiving equipment in stores and many people appreciated the beauty of the LUX sound. This was the very beginning of LUXMAN’s long history of tonal quality pursuit.

LUXMAN paid particular attention to the world of audio and quickly gained a reputation as a quality brand of high-end audio products both domestically and internationally.

The ultimate refinement of separates in a single unit.

The L-509X integrates the features of both a high quality separate amplifier and a high performance integrated amplifier into one product. The goal of creating an ideal integrated amplifier, initiated by LUXMAN with the launch of the L-509fSE in 2002, has now been advanced with the development of the L-509X. The L-509X integrated amplifier is equipped with many desirable features, such as the New LECUA1000 and a discretely configured buffer circuit in the output stage of the pre-amplifier circuit. LUXMAN’s ODNF (Only Distortion Negative Feedback) original amplifier feedback circuit and a power supply with independent left and right channel blocking capacitors are intrinsic to this design, as well as many components used only in high end models, ensuring high-quality audio reproduction.

The design of the L-509X incorporates the cream of LUXMAN's proprietary technologies, breaking new ground and creating the ultimate expression of “separates in a single unit”. 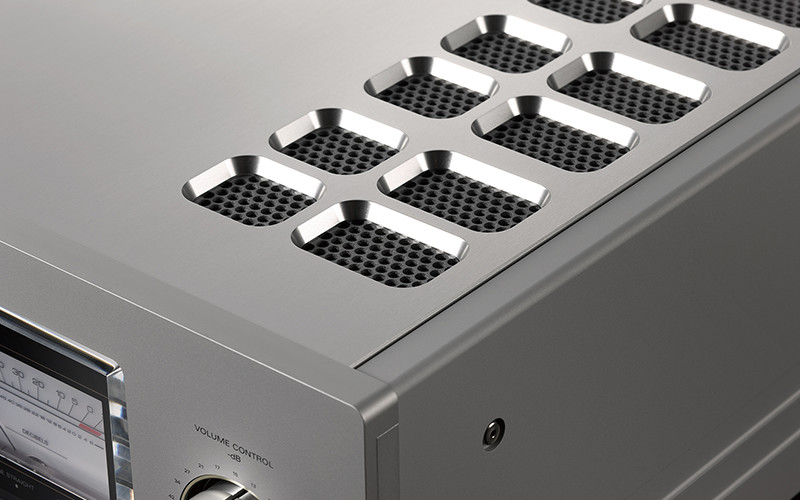 The L-509X features a top panel with a beautiful hair-line finish and widened venting to improve heat dissipation.

An abundance of user-friendly functions

The L-509X is equipped with a high-quality phono amplifier, compatible with MM and MC cartridges.

This model offers all the functions that a high quality integrated amplifier should, including bass and treble tone controls, L/R balance adjustment controlled by LECUA, pre/power separation function, volume control and headphone output, all integrated into a single unit without compromising sound quality. 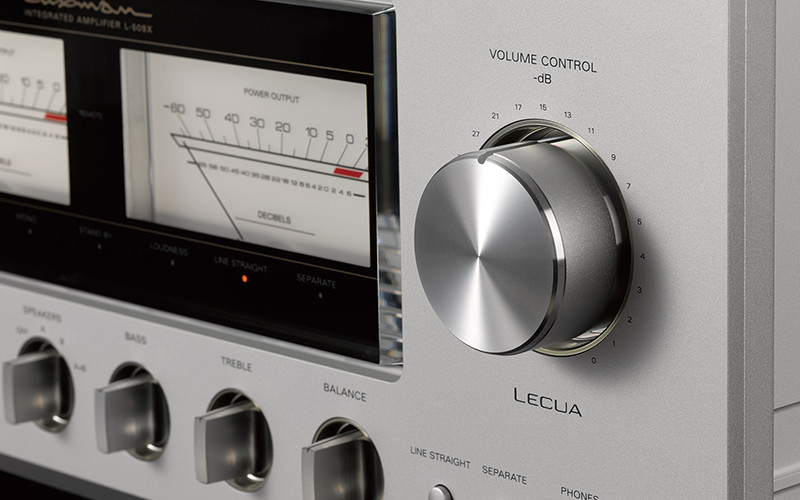 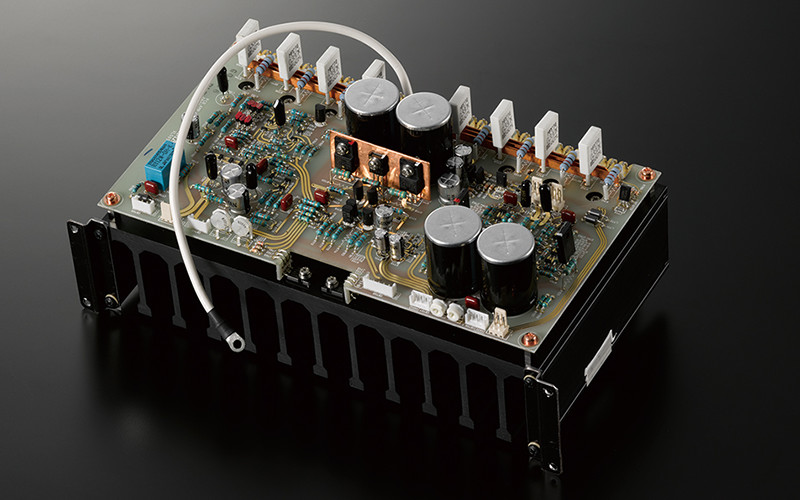 An integral part of the design of the L-509X is LUXMAN's original ODNF* amplification feedback circuit, featuring a high-speed primary slew rate, an ultra-wide bandwidth and a low level of distortion that is achieved by feeding back only the distorted components of the audio signal from the output of the amplification circuit. The L-509X is equipped with the latest Version 4.0 ODNF providing a dramatic enhancement of accuracy in distortion detection due to the triple-paralleled first stage error detection circuit. Lower impedance and a higher signal to noise ratio have been achieved due to the paralleled first stage and Darlington equipped second stage amplification circuit. A 3-stage Darlington circuit and a 4-parallel push-pull structure is used for the output stage, similar to the M-700u power amplifier. This achieves output at 120W+120W(8Ω) and 220W+220W(4Ω), enabling the L-509X to drive speakers

The L-509X is equipped with a discrete buffer circuit that is equivalent to the type used in the high-end LUXMAN C-900u separate amplifier. The clarity of the audio signal is preserved by this circuit whilst at the same time the following power amplification stage's driving force is significantly increased. 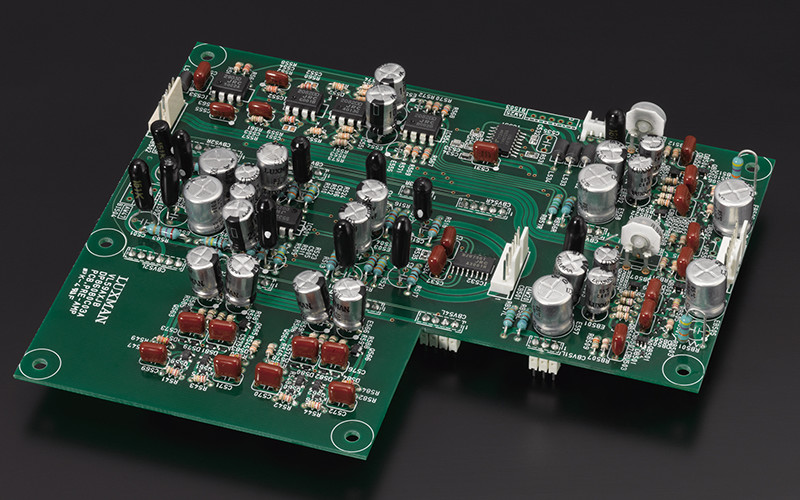 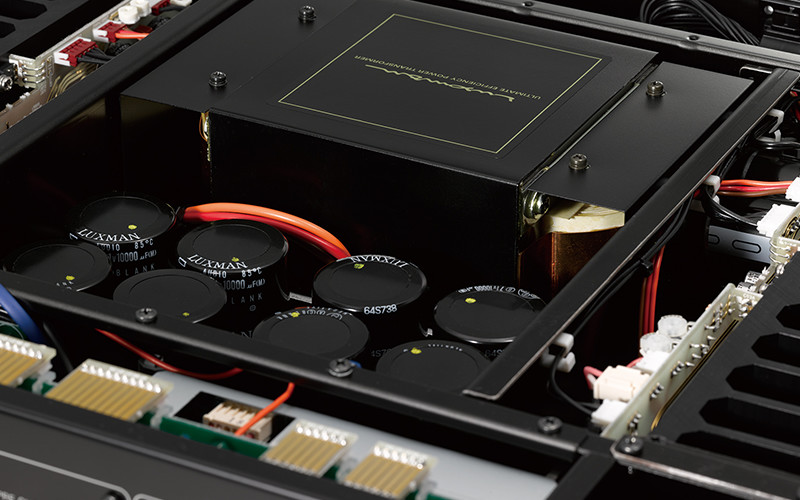 The highly stable power supply circuit developed for the L-509X features a 600 VA EI-core-type power transformer and independent left and right channel large capacity blocking capacitors (10,000μFx4 per channel). This generous custom specification ensures that the power supply unit will not be affected by any load fluctuation.

LUXMAN's New LECUA1000 is at the heart of the preamp section and the volume adjustment control of the L-509X. This computerized attenuator is integrated with the amplification circuit, a feature integral to the high-end LUXMAN C-900u control amplifier. LECUA provides an ideal level control system which allows smooth and fine adjustment of the volume over 88 steps, thereby minimising the deterioration of audio quality at any point of the volume adjustment range. An advancement of the New LECUA1000 is the 3D design layout. The attenuator circuit board is directly connected to the amplification circuit board. Signal routing has been minimized andefficiency has been successfully enhanced. In addition, this design is extremely resistant to external vibration and eliminates changes in audio quality over the volume control range. The robust nature of this system ensures longevity and durability. *LECUA stands for “Luxman Electronically Controlled Ultimate Attenuator”. 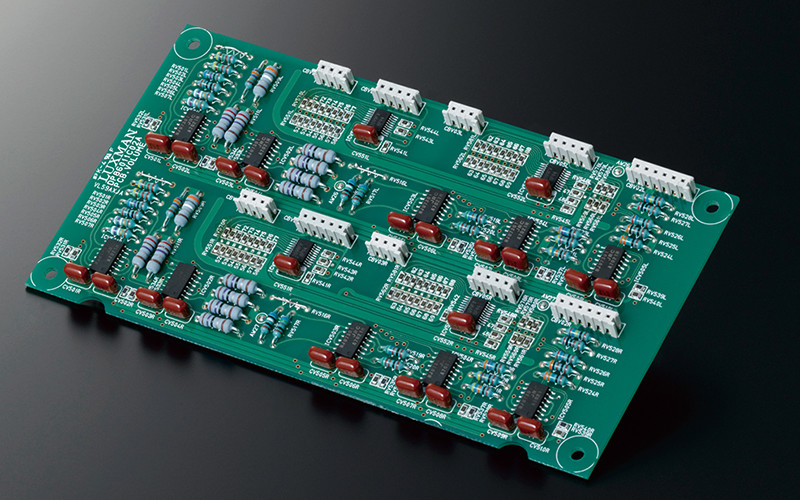 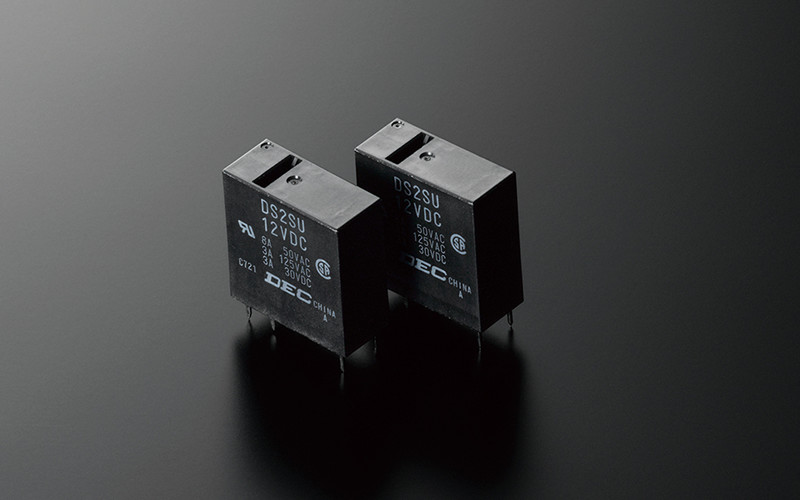 Large-capacity, low resistance speaker relays are connected in parallel, enabling loss-less transmission of the powerful driving force that is generated by the generous power supply circuit and the amplifier output section of the L-509X. The use of 3.5mm2 cabling for the amplifier board output and the unit's damping factor of 370 enables the L-509X to drive all kinds of speakers accurately.

High quality RCA terminals, made of copper alloy, are used for the LINE-1 inputs of the L-509X, combining the beneficial conductivity of copper and durability of brass. The L-509X features many custom-made components befitting a flagship model, such as the robust power supply and high-grade speaker terminals that are compatible with Y-connectors. 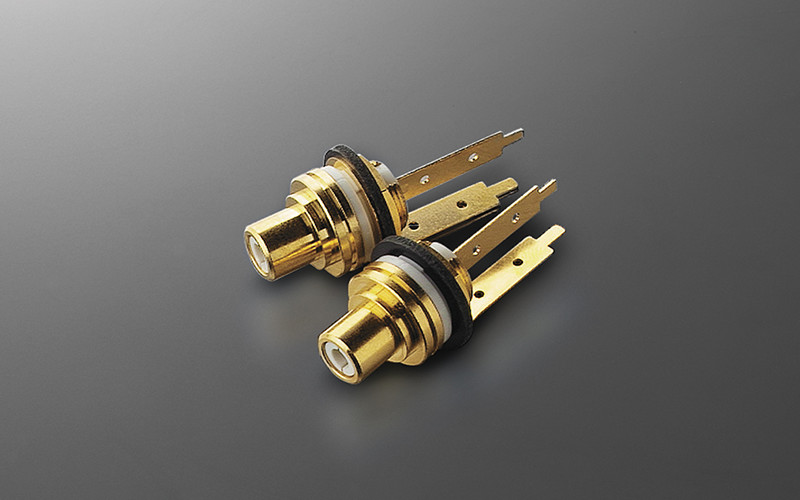 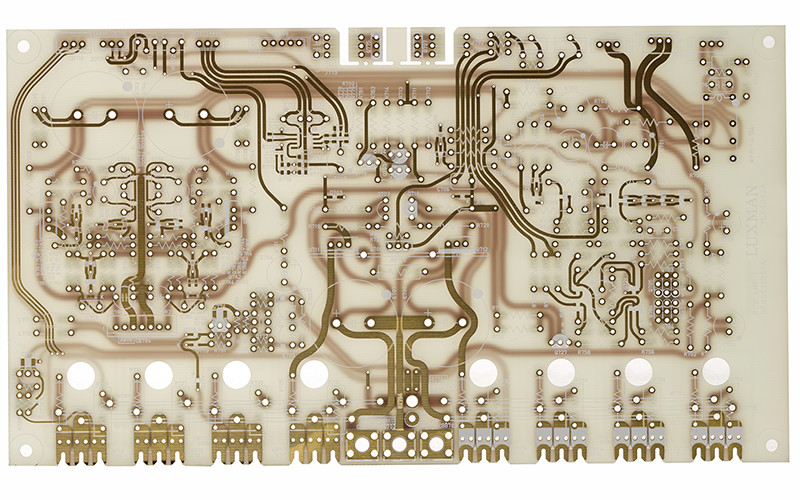 The use of crack-resistant peel coat PCBs for the amplifier boards prevent the quality of audio signals being adversely affected. This product prioritizes audio quality in features such as the non-angled, direct wiring pattern, known as the original LUXMAN’s Beeline construction, ensuring smooth signal transmission via the optimum shortest route. 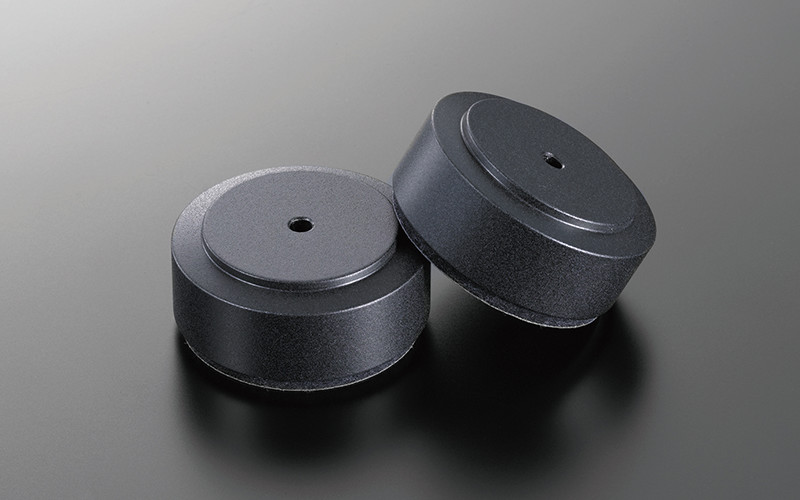 The attraction of the L-505uXII is its new level of refinement, approaching perfection as an authentically desirable product

The L-505uXII is the eagerly awaited Mark II version of the popular L-505uX that has been at the forefront of pre-amplifier design since it's launch in 2011. Incorporating an abundance of proprietary technologies, such as Luxman's Version 4.0 ODNF (Only Distortion Negative Feedback), as well as LECUA (Luxman Electronically Controlled Ultimate Attenuator), this product is a truly multifunctional integrated amplifier. As Luxman's latest high-end model, the L-505uXII continues the evolution of the L-505 series, which has attracted many fans of audio quality and earned a great reputation. As an amplifier which exudes sophistication and authenticity beyond its class, the L-505uXII represents the latest in a long line of exemplary models.

An abundance of user-friendly functions

The L-505uXII is equipped with a high quality phono pre-amplifier that is compatible with MM and MC cartridges supporting full analog reproduction.

This model offers all the functions that a high quality pre-main amplifier should offer such as bass/treble tone control, L/R balance adjustment using LECUA, pre/power separation function, volume function and headphone output to name a few. 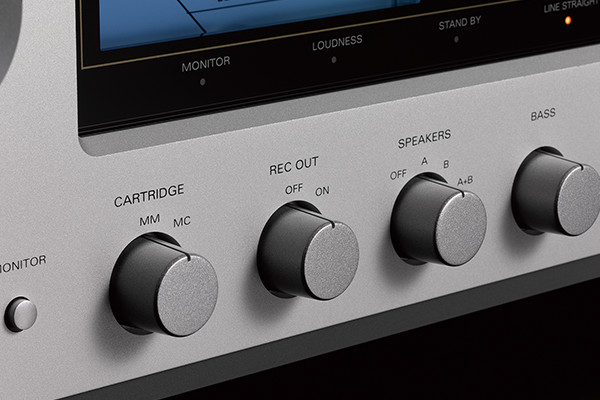 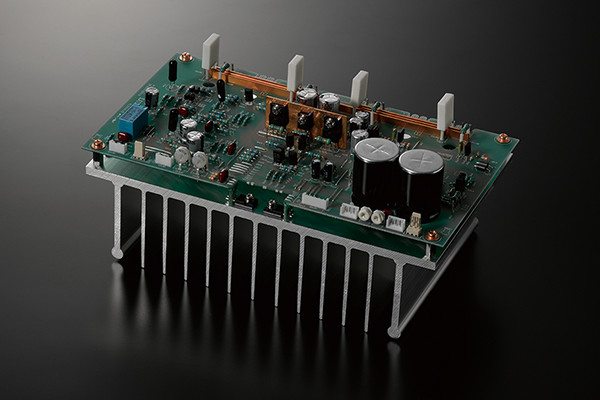 An integral part of the design of the L-505uXII is LUXMAN's original ODNF amplification feedback circuit featuring a high-speed primary slew rate, an ultra-wide bandwidth and a low level of distortion that is achieved by feeding back only the distorted components of the audio from the amplifier's output circuit. The L-505uXII is equipped with the latest Version 4.0 ODNF circuit, resulting in a dramatically enhanced accuracy in distortion detection due to the paralleled first stage and Darlington equipped second stage amplification circuit, as well as a paralleled first stage error detection circuit. With it's lower impedance and higher S/N ratio, the L-505uXII realizes accurate reproduction of even the gentlest audio signals and achieves a full range of dynamic musical expression. The output stage, with it's parallel push-pull structure, has secured sufficient power at 100W+100W(8Ω) and 150W+150W(4Ω).

LECUA (Luxman Electronically Controlled Ultimate Attenuator) is at the heart of the pre-amplifier section and the sound volume adjustment function of the L-505uXII. The L-505uXII design also uses a solid state(IC) type circuit to achieve a significant reduction in size. LECUA provides an ideal level control mechanism that allows smooth and fine volume adjustment over 88 steps, thereby minimizing any deterioration of the audio signal. In addition, left and right balance adjustment is integrated into the attenuator's control functions. The multifunctional ability of LECUA ensures accuracy over the full range of the volume control, whilst suppressing any deterioration of sound quality. The volume may also be adjusted with the remote control, but when adjusting the volume manually, the tactile design and gradual motion of the control itself enables intuitive adjustment of the attenuation level. 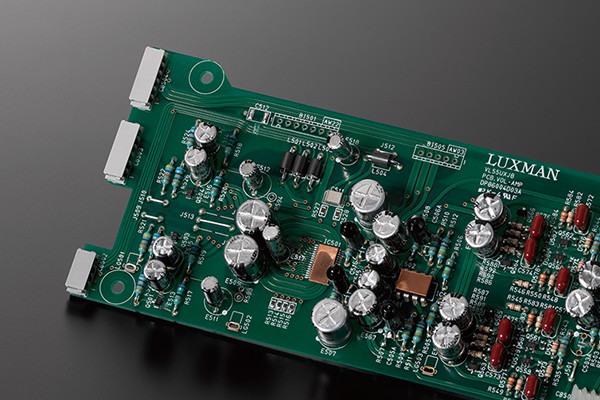 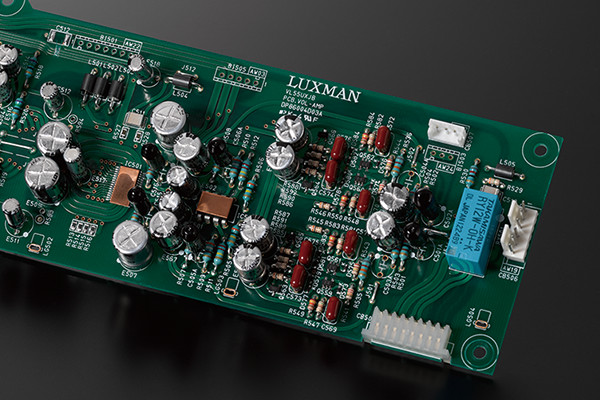 The L-505uXII features a new discrete buffer circuit in the output stage of the pre-amplifier circuit that is equivalent to the type used in our high-end C-900u separate amplifier. The pre-amp output stage is able to drive the signal with enhanced current supply capacity. The clarity of the audio signal is protected, whilst at the same time, the driving force fed through to the power amplifier stage is significantly increased. The power and reproduction capability of the L-505uXII achieves overwhelming scale sensitivity and a sharpness on start-up that cannot be achieved by conventional pre-amplifiers. 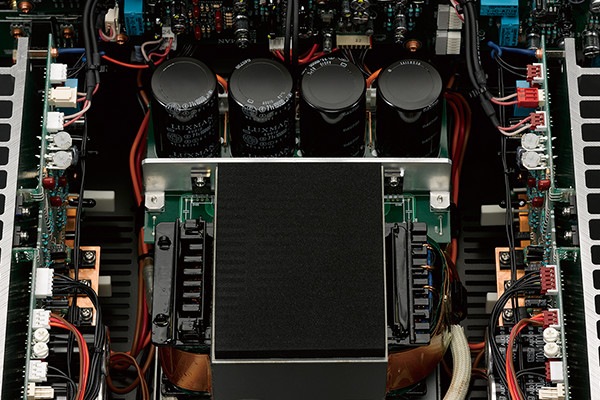 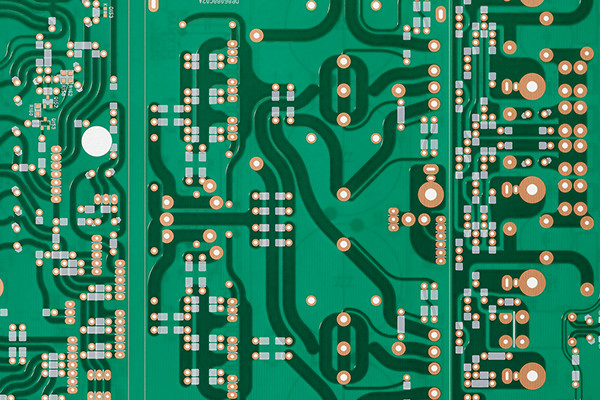 OFC cabling is used in the internal wiring of the L-505uXII, achieving natural signal transmission due to the spirally wrapped shielding on each non-plated wire core. A high quality input selector IC is employed to improve separation and eliminate crosstalk. This model is generously equipped with many custom-made parts designed to achieve high sound quality such as in-line layout speaker terminals for easier speaker cable connection.

Large-capacity, low resistance speaker relays are connected in parallel to enable lossless transmission for the powerful driving force that is generated by the large-scale output circuit. In addition, the damping factor has been improved from 180 to 210 by lowering the impedance of the wiring pattern. 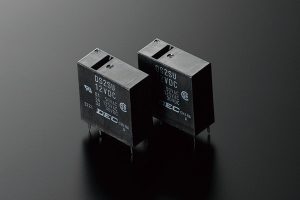 Thanks for getting in touch with us about Luxman Integrated Amplifiers.

We will be in touch soon.

This website uses cookies to improve your experience while you navigate through the website. Out of these, the cookies that are categorized as necessary are stored on your browser as they are essential for the working of basic functionalities of the website. We also use third-party cookies that help us analyze and understand how you use this website. These cookies will be stored in your browser only with your consent. You also have the option to opt-out of these cookies. But opting out of some of these cookies may affect your browsing experience.
Necessary Always Enabled
Necessary cookies are absolutely essential for the website to function properly. This category only includes cookies that ensures basic functionalities and security features of the website. These cookies do not store any personal information.
Non-necessary
Any cookies that may not be particularly necessary for the website to function and is used specifically to collect user personal data via analytics, ads, other embedded contents are termed as non-necessary cookies. It is mandatory to procure user consent prior to running these cookies on your website.
SAVE & ACCEPT
0